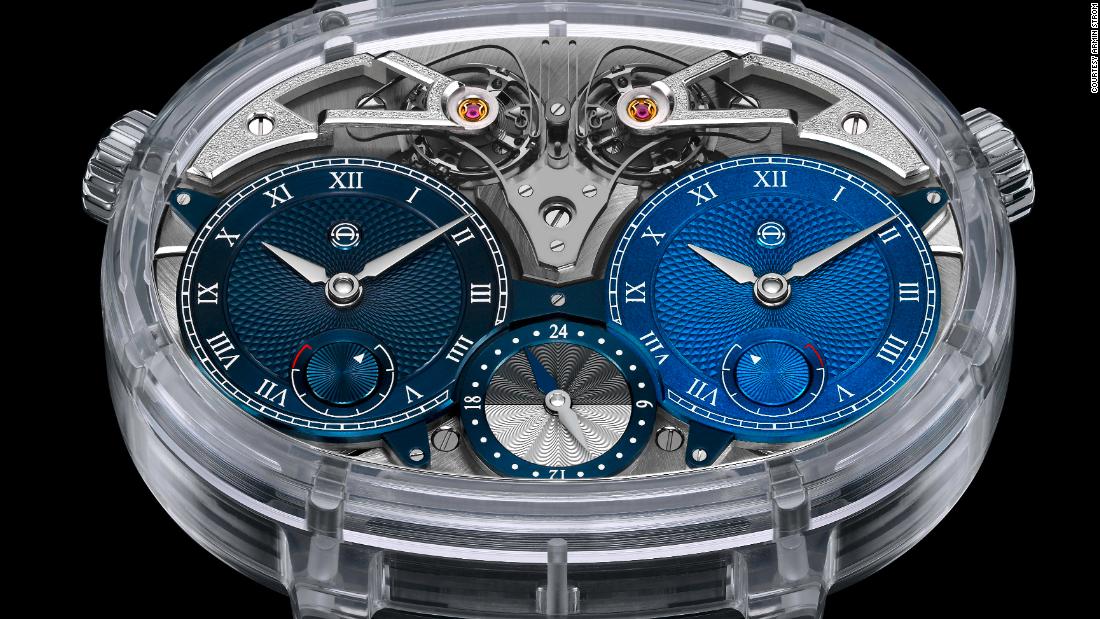 Elizabeth Doerr is the editor-in-chief of the online specialist watch magazine Quill & Pad.

With only 35 exhibitors, the Salon International de la Haute Horlogerie (SIHH) in Geneva is one of the smallest watch shows. But what it lacks in size, it more than makes up for in prestige. Its ultra-luxurious exhibitors, including Cartier, Vacheron Constantin and Hermès, offer some of the most technically advanced – and most expensive – timepieces in the world. So, is it any wonder that 20,000 invite-only visitors flock each year?

The 2019 edition, which opens today, sets the tone for the year to come in fine watchmaking thanks to its anticipated date. Here we preview some ticking treasures on display.

The return of high complications

Hermès Arceau Hour of the Moon Credit: Courtesy of Hermès

In recent years, there has been a slowdown in terms of new creative complications (a term used to describe functions other than the display of hours, minutes, seconds and date.) But if the watches featured on the front -first at SIHH are a sign, 2019 could see this change.

Leading the pack is the novel Traditionnelle Twin Beat by Vacheron Constantin. Its modern look isn’t the only departure for this great house: this watch can also perform a mechanical magic trick in that the user determines how fast or slow the movement powering the watch beats (active mode) and turns off. (sleep mode) the wrist. The goal of this horological feat is to lengthen the period between windings so that the many displays of its perpetual calendar do not need to be reset after closing – the bane of any collector’s existence – even after two phenomenal months.

Elsewhere, Hermès presents its fourth haute complication since 2011, this time taking us to the moon. Arceau l’Heure de la Lune’s dial features two mother-of-pearl moons (one of which reveals a barely painted drawing of Pegasus) representing the satellite of the Earth as seen from the southern and northern hemispheres respectively. The moons are static, while the time and date displays rotate around the dial, covering chunks of each to accurately reflect its current phase.

Boutique brand Armin Strom is a technological powerhouse, and its new Dual Time Resonance sapphire shows us exactly why. This double-movement timepiece is only the third in history to put the properties of resonance (a phenomenon that causes a synchronized movement, in this case between the two movements powering the watch) to serve the precision of the watch. ‘time. And the wearer can see it in action from all angles thanks to its new sapphire crystal case.

Belgian independent Ressence presented its Type 2, a mechanical / electronic hybrid watch that uses its own e-Crown – a new 21st century version of the manual crown used for winding and setting – to automatically set and adjust watches. watch hands at the right time. Powered by photovoltaic cells, the e-Crown is controlled by tapping the watch. However, Type 2 can also be set manually or with an app.

HYT, the only manufacturer of mechanical watches that uses liquid to display the time, has released an equally innovative watch that appears to come straight out of “Bladerunner”. The red fluid of the new H20 (indicating the hours) contrasts with the very traditional – and perhaps deliberately old-fashioned – use of yellow gold elements decorated with traditional guilloche patterns throughout the watch.

The final edition of the MB&F Horological Machine 6 is no less futuristic with its spaceship curves and bulbous display domes. Indeed, it is difficult to imagine that this watch is animated by a purely mechanical movement which follows the same contours. A close encounter of a particular kind for sure.

No matter how many brands adopt a futuristic aesthetic, there will always be a demand for a classic design. Fortunately, Montblanc is here to deliver the exceptional new pieces of its Heritage line, led by the Heritage Pulsograph Limited Edition 100. Sure to be a crowd pleaser, this chronograph timer comes with a stunning all-salmon colored dial. straight out of a 1940’s textbook. design.

To celebrate the 25th anniversary of its Lange 1, A. Lange & Söhne also looked to the past, releasing an attractive limited-edition anniversary edition of the watch industry’s most famous asymmetrical timepiece.

The beauty of the baguette

Unlike the years of sports watch domination, expect a touch of elegance to return to men’s watches in a more noticeable way.

One mini-trend I’ve already noticed in 2019 is the use of under the radar baguette-cut diamonds as hour markers on luxury men’s watches, which are hard to distinguish from remote polished metal. This trend may have been started with the 40th anniversary of the Patek Philippe Nautilus 5976 / 1G reference in 2016. Now I find them on watches from other brands at SIHH 2019: the Altiplano Haute Joaillerie by Piaget and the Cabinotiers Sky Chart Minute Repeater Tourbillon from Vacheron Constantin both have these unusual markers.

The return of the barrel

At the same time, the tonneau shape – a rounded rectangle – is making a strong comeback in men’s watches after several years of absence.

The barrel first became a form of case in the early 1900s, when forward-thinking wristwatch makers tried to differentiate themselves from those who simply soldered lugs onto pocket watch cases to make a wristwatch.

But the style has never been the most popular among men, which is a big part of why it has all but disappeared in recent years, when manufacturers have been less inclined to take risks. The tonneau shape is however considered extremely elegant, and particularly in the new Tonneau XL Skeleton Dual Time from Cartier. An alluring variation on the barrel theme is also featured in the almost rectangular Laurent Ferrier Bridge One, whose original lugs help create its unusual 30 x 44mm case shape.

Blue for you – with a twist

Enamel dials, which date back to the pre-industrial era of mass production, have grown in popularity in recent years, and in 2019 this trend continues more than ever. And blue enamel seems to be experiencing a particularly notable resurgence, now anchoring itself to the global blue trend in watchmaking.

Two new watches presented at SIHH 2019 – the Virtuoso IX convertible by Bovet, which also doubles as a pocket watch, and the Master Ultra Thin Moon Enamel by Jaeger-LeCoultre – feature one of the most beautiful, traditional and difficult to produce: flinqué. Here, the dial is first engraved using the traditional guilloche technique, then covered with enamel. The effect is a pattern visible through the translucent material, providing incredible depth.

As the SIHH vividly shows, 2019 should offer wearable art for everyone.