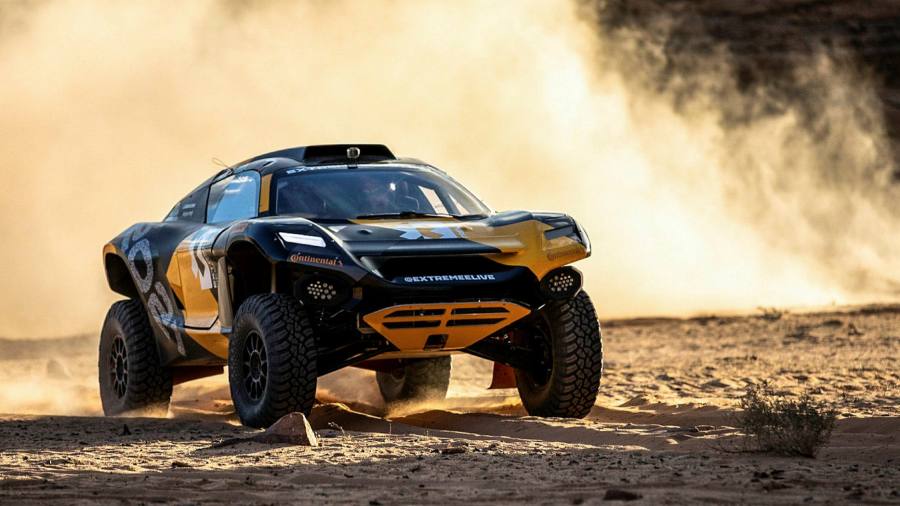 When Zenith CEO Julien Tornare was offered the opportunity to make his brand the official timekeeper for a new series of auto races, his instinct was to decline.

“When the concept of the Extreme E was first presented to me, I wasn’t really interested because mainstream car racing doesn’t match the green thinking Zenith is working on now,” he says. But Tornare was influenced by both the greener nature of this new off-road motorsport championship and the fact that Zenith was set to launch a sporty model at next week’s Watches and Wonders show called Defy. Extreme.

Tornare also knew Alejandro Agag, founder and general manager of Formula E, which kicked off the eponymous championship of electric racing cars in 2014. Since then it has grown into a fully-fledged international series contested by automakers such as Mercedes- Benz, Jaguar, Porsche. and BMW.

The first Extreme E race took place last weekend in Saudi Arabia, with nine teams – including a male and female – competing in the Odyssey 21-E SUVs developed for the championship. Four other races are scheduled until December, in Senegal, Greenland, Brazil and Argentina.

“The harsh environments in which the races take place are exactly what the Defy Extreme was designed for,” explains Tornare. “We love the green approach and endorse that the competition promotes gender equality. “

But while Tornare doubts the benefits of other watch brands continuing to engage in the world of fossil fuel cars, a recent wave of activity in this area suggests that there is still some way to go before such partnerships do not run out.

The inaugural race of this year’s Formula 1 championship – of which Rolex has sponsored since 2013 – highlighted several tie-ups, including Alpine F1 and Bell & Ross; AlphaTauri Honda and Casio Edifice; Mercedes AMG Petronas and IWC; Red Bull Racing Honda and Tag Heuer; as well as McLaren and Richard Mille.

Girard-Perregaux also joined the F1 party as a partner of Aston Martin Cognizant, Bremont partnered with Williams Racing and, rather than straying from it, Richard Mille strengthened his ties with the sport – in addition to its McLaren agreement – taking over from Hublot as Ferrari’s official watch.

Hublot CEO Ricardo Guadalupe said his brand’s nine-year partnership with Ferrari ended amicably. “The automotive industry is going through a revolution and we probably won’t make any other partnerships in this area,” he explains. “Art, design and architecture interest us more”.

In contrast, Tag Heuer has partnered with Porsche to exploit the two companies’ long-standing use of the Carrera nameplate, while Richard Mille, founder of the brand that bears his name, believes his two personal passions for cars and watches can continue to enjoy a mutually beneficial relationship for a long time to come.

Its watches, sold as “wrist racing machines”, are coveted and worn by the world’s greatest pilots. “Ferrari came to see me last summer to discuss the possibility of a partnership,” explains Mille. “It was a surprise, and I had to think about it carefully because it’s a legendary brand and it seemed important that there was real substance to everything we do.” Ferrari is in the process of reviewing its licensing agreements.

Mille says the new deal with Ferrari does not infringe on the 10-year contract his brand signed with McLaren in 2016. “We are creative enough to be able to develop very different watches and we will be working directly with the design teams at each. mark to make sure we do. Collaborations like this have a long way to go – no matter how a car is powered, it will always have a mechanical side and an aesthetic side that is relevant to watchmaking.

Bremont founder Nick English agrees. The British brand he founded with his brother Giles has a long-standing partnership with automaker Jaguar which this year culminated in the launch of a series of watches commemorating the 60th anniversary of the E-Type sports car. Now Bremont has entered the F1 arena thanks to a new deal with Williams Racing that follows the team’s split from longtime watch partner Oris.

Although Bremont is the official Williams Racing partner, the connection, Nick English says, runs much deeper. “The partnership is just as technical. Williams is interested in what we’re doing at our new manufacturing facility in Henley-on-Thames and we can learn a lot by having access to the team’s amazing engineering facility a few miles away. They can, for example, teach us how to optimize the flow of components and products.

“Cars and watches definitely have a future. One only needs to take a close look at an F1 car to appreciate the incredible levels of design and engineering that go into everything from the suspension and aerodynamics to the chassis and braking systems. The method of powering, in fact, seems almost secondary – whether it’s electricity or gasoline, an F1 car will always be on top of engineering technology and that technology will continue to infiltrate. various aspects of civilian life for a long time. to come.”