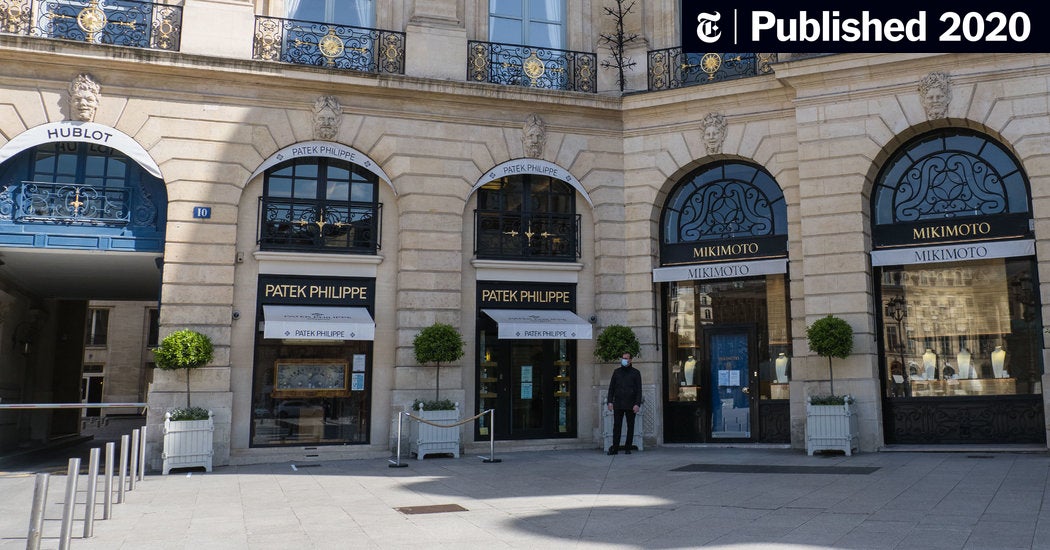 the coronavirus The crisis is set to wipe out at least a decade of growth for the Swiss watch industry, with analysts predicting a 25% drop in exports in 2020 stemming from months of retail store closures around the world.

“We have no illusions that business will be gangbusters,” said Ruediger Albers, president of watch retailer Wempe USA, whose Fifth Avenue store in Manhattan has been closed since mid-March.

Rene Weber, a Zurich-based luxury goods analyst with Swiss private bank Vontobel, said the estimated 25% decline in exports, which he forecast in a report released on April 1, “currently appears to be optimistic”.

“Major groups – Swatch Group, Richemont, LVMH – and high-end brands like Rolex, Patek Philippe and Audemars Piguet have very strong funding,” Weber wrote in an email. “The big players will become even bigger, while the smaller brands will have more problems – not just funding, but also distribution.”

The troubles extend to the retail sector, where multi-brand stores are caught between powerful brands keen to eliminate wholesalers and, on the other hand, consumers concerned about their personal finances.

“Even before the pandemic, independent watch and jewelry retailers in Europe and North America, many of which are small, family-owned stores, were already struggling – in part due to the shift of high-end watch brands to the vertical integration and, more recently, the growth of e-commerce and the rapid development of the smartwatch industry,” Thierry Huron, founder of The Mercury Project, a Swiss watch and jewelry consulting firm, wrote in an email.

“Covid-19 could force some of them to close,” Huron added.

Here is an update on the widespread impact of the pandemic.

After almost two months of shutdown, most Swiss watchmakers restarted production in late April and early May, although many are working at reduced capacity.

Production resumed at Patek Philippe’s facilities in Geneva on April 27 and is gradually returning to normal, according to a company statement. The Rolex factory, which reopened on May 4, is back to nearly 100%, a spokeswoman said. And Audemars Piguet restarted on May 11, but remains at around 80% capacity.

“We hope to get back to 100 right after the holidays, by the end of August,” said Audemars Piguet chief executive Francois-Henry Bennahmias.

Omega, another of the industry’s best-selling brands, never officially closed its factory and gradually ramped up production in stages, a spokeswoman said.

The pause in manufacturing has caused delays throughout the pipeline.

“My biggest problem is not getting my stock in,” said Alon Ben Joseph, managing director of Ace & Dik Jewelers in Amsterdam. “Tudor closed and I missed two monthly deliveries.”

Retailers are reopening their stores while trying to incorporate new practices and strategies designed to make consumers feel safe.

“We have these Perspex guards to prevent airflow and potential infections,” said Brian Duffy, managing director of the Watches of Switzerland group, based in Leicester, England, and owner of numerous multi-brand and mono-brand stores in the States. United States and Great Britain. . “Because you can never stay six feet apart when presenting a watch.”

In April, Swiss watch exports dropped 81.3% overall in value compared to the previous April, to reach 328.8 million Swiss francs, or nearly $342 million, according to the Federation of the Swiss Watch Industry. (Exports are a lagging indicator because they don’t track retail sales, but they are considered an important indicator of the health of the industry.)

From January to April, exports fell by 26.3% in value compared to the same period last year.

In the world’s two main markets for Swiss watches in 2019, Hong Kong and the United States, April exports collapsed by 83.2% and 86.4%, respectively.

By contrast, a relatively modest 16.1% year-on-year decline in China – which absorbed a third of Switzerland’s watch exports in April – signaled a recovery.

“We expect strong growth in China in the coming months as Chinese people travel much less,” Weber wrote in an email. (In the past, Chinese travelers spent lavishly when traveling abroad, avoiding their country’s steep import duties on domestic purchases.)

He said a quick recovery in Hong Kong was unlikely as unrest Beijing’s efforts to impose national security legislation continued and quarantine restrictions effectively wiped out tourism from mainland China.

Similarly, Europe’s lack of tourism will likely lead to a 40-50% drop in its share of Swiss watch exports in 2020. And the United States, Weber predicted, would see a 20-30% drop in their exports by the end of the year.

However, to blame the coronavirus for all the woes of the Swiss watch industry is to miss a bigger point embedded in the federation’s latest figures.

“In all of this data, what’s happening with unit exports is overlooked,” said Joe Thompson, editor of watch website Hodinkee.

“I’m only pointing it out as another measure of how serious things are,” he said.

Analysts see Compagnie Financière Richemont – owner of Cartier as well as eight specialist watchmakers including IWC, Jaeger-LeCoultre and Panerai – as an indicator of how the global luxury trade will weather the storm.

In his annual report 2020 for the fiscal year ending March 31, which was released on May 15, the company said the coronavirus was responsible for approximately 800 million euros, or $890 million, in lost sales, as well as an 18% decline in global sales in the fourth quarter.

Sales of the group’s specialist watchmakers were down 4% on the year, due to higher gold prices, a stronger Swiss franc and, of course, a sharp contraction due to the coronavirus in the Asia-Pacific region, the group’s largest market.

The state of the virus in the United States The coronavirus has now claimed an estimated 900,000 lives across the country, and Covid death rates remain alarmingly high. However, the number of new infections has more than halved since mid-January, and hospitalizations are also down.

Around the world. Several countries are relaxing their pandemic protocols, though World Health Organization public health officials have continued to urge caution about easing restrictions. In Austria, a broad Covid vaccine mandate is set to become law.

Rumors about the Baselworld show continue to swirl.

The 103-year-old fair – the world’s oldest and largest watch fair, owned by MCH Group, the organizer of around 90 other exhibitions, including the Art Basel fairs – initially ‘postponed’ its 2020 edition. Then it canceled the January 2021 replacement after a group of exhibitors, led by Rolex and Patek Philippe, announced it was leaving to form a rival event in Geneva next April.

Now, MCH says it will refocus the show on a broader section of the watch and jewelry industry, a change that will include a new name and, potentially, a new location.

“Now is a good time to reconsider the brand,” said Michel Loris-Melikoff, Baselworld’s chief executive since July 2018. The comment echoes comments he made in 2019.

Mr. Loris-Melikoff said he would present a business plan for the 2021 event to the show’s board of directors this month, including proposals to showcase independent watch brands, exhibitors representing both pre-owned watches and smartwatches, as well as gemstone and jewelry companies committed to sustainability.

In response to reports that the show would move to Lausanne, Switzerland, in 2021, Loris-Melikoff said a concept must be approved before a destination, and suggested the event could stay in Basel or be held at an MCH-owned venue in Zurich. He said MCH will ensure the calendar is in sync with the Watches & Wonders show in Geneva, scheduled for next April. (Dates have not been announced.)

Additionally, the organizers of Geneva Watch Days, a multi-brand event for retailers and media originally scheduled for the end of April, have confirmed that it will take place from August 26-29 at city center venues.

The specter of failure

There have been many rumors of bankruptcies in the Swiss watch industry, but if there will be a wave, it has yet to materialize.

Unrelated to the coronavirus, RJ Watches, known for its pop culture-themed watches, announcement On February 27, it had filed for bankruptcy in Switzerland because its majority shareholder, Alliance Investment Group, had stopped investing in the company.

Jean-Daniel Pasche, president of the Federation of the Swiss Watch Industry, said on May 29 that he had not heard of any coronavirus-related bankruptcies, but that he “cannot exclude that some companies may not cannot survive this crisis”.

Most industry watchers agree that small businesses are the most vulnerable, but others counter that independent businesses are more nimble than their larger competitors and can adapt to the rapid changes brought on by the pandemic.

“Any plan we made two or a month ago no longer applies, as the situation changes every week,” said Maximilian Büsser, founder and creative director of Geneva-based independent brand MB&F. “I was talking with my sales manager about our three-year plan. “In 2023, do you think we will sell this piece?” And we were just laughing.

“We forecast the same revenue in 2021 as in 2020,” added Büsser. “Perhaps we will have a nice surprise, but I refuse to pilot my company on hope. I prepared for the worst-case scenario.